Molecular evolution pioneer Richard Lewontin died at 92. His ground-breaking publication was The Genetic Basis of Evolutionary Change (1974). In 1979 he wrote together with Steven Jay Gould the famous article "The Spandrels of San Marco and the Panglossian Paradigm: A Critique of the Adaptationist Programme". He was also known for his Marxist writings criticizing genetic determinism, social inequality and racism: Not in Our Genes (1984, together with Steven Rose and Leon Kamin); Biology as Ideology: The Doctrine of DNA (1993); The Triple Helix. Gene, Organism, and Environment (2000);  and It Ain't Necessarily So. The dream of the human genome and other illusions (2001).

To understand what was so revolutionary about Lewontin's contribution to evolutionary biology, we need to go back to the time before DNA sequencing. Today we see thousands of SARS-CoV-2 sequences being published almost on a daily basis. We can follow the spontaneous origin, spread or disappearance of new variants over the planet. Variation is the cornerstone for Darwin's theory. But the only variation available to Darwin was morphological variation. When Lewontin started his research in the mid sixties certain variations of proteins were detectable by a technique called electrophoresis. This technique could detect protein size differences and differences in electrical charge. Lewontin applied this technique to detect mutations in natural populations of Drosophila. That is, mutations that changed the size or electrical charge of a protein compared to the wildtype protein. In this way he could measure the degree of heterozygosity. Heterozygous refers to having inherited different forms of a particular gene (or protein) from each parent. Lewontin and Hubby found to their surprise that an average individual was heterozygous at 12% of its genes. The other 88% is homozygous (two identical copies of a gene).

Why is this so important for evolution? Suppose there was no genetic variation in natural populations. All individuals are homozygous, as if they were clones. Or identical twins. Then natural selection could do nothing. No evolution. But as soon one of the two copies of a gene has mutated, natural selection could favour one over the other. Textbooks say: "variation is the raw material for evolution." Darwin was right about that.

This study was soon followed by many others. The results were always: every individual in a population is genetically unique because there are potentially hundreds to thousands of variants of each gene and each individual harbours different combinations of all those gene variants. That was big news at the time. It transformed the way scientists think about evolution.

Researchers wondered why all those variant forms were not eliminated? Why don't we see only the wildtype? Are they random variations with no effect on fitness? Why did natural selection not eliminate them? In other words scientists at the time worried there was too much variation. Natural selection is a costly process ('the cost of natural selection problem'). Selection requires differential survival or reproduction. Later these questions led Kimura to propose his now famous 'The neutral theory of molecular evolution'.

Still later protein and DNA sequencing revealed far more differences between individuals. The first study of genetic variation using DNA sequences was published in 1983. That is 30 years after Watson and Crick published the structure of DNA. The rest is history. Today the study of evolution is the study of variation at the DNA level.

The popular science books I mentioned above are within a different category. Difficult to summarize. These books are a mix of political activism, science criticism, and popular science. Often written from a political perspective or highly critical to mainstream scientific views on adaptation, genetic determinism, development, and the role of the environment. Undoubtedly, the most famous is the article he wrote with Steven Jay Gould: 'The spandrels of San Marco and the Panglossian paradigm: a critique of the adaptationist programme' (1979).

See also an obituary of Lewontin in Nature: Richard C. Lewontin (1929–2021). Pioneer of molecular evolution who campaigned against biological racism.

What the textbooks say about Lewontin

Tiengemeten: a not widely known island in the Netherlands where nature rules

There is a not widely known island in the Netherlands where nature rules. It is located in the South-West of the Netherlands in the Haringvliet. It is small: 7 km by 2 km. Today only 8 people live permanently on the island. In 2006 the last farmer left the island. No agriculture any more. No tractors any more. All roads except one have been removed. Creeks were formed where once there were roads. Remarkably, there are no fences, only natural barriers like creeks. That's unique for a nature reserve in the Netherlands. It is an open landscape. A few trees are scattered around the island, but there is no forest. Scottish Highland cattle prevent new forest formation. Officially, the whole island is now a nature reserve. That means: nature rules. It is managed by Natuurmonumenten, a national nature conservation organization. The island is a paradise for birds and the place to go for birdwatchers. Next blogs will show bird pictures.

The only way to get there is with a small ferry for passengers and bicyclists and one larger ferry for cars (only 3 cars at most!). Or with your own sailing boat.

Sometimes the landscape looks like paintings from Vincent van Gogh (above). 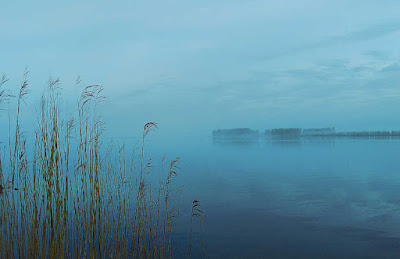 The pictures of beavers (there was a pair of beavers) were taken in the early morning. I did not see them at daytime. I think I was at the right moment at the right place. I didn't know they lived close to our house. There are no trees close to the water. It was a surprising observation. At first I was not sure what it was. An otter? A Muskrat? I must be a beaver. Image recognition software ObsIdentify agreed: it was a beaver. Later a moderator agreed. A nice observation!

Contrary to the Wadden islands (in the North of the country) visitors are not allowed to bring their car to the island. Except when you rent a holiday home. There are only 3 holiday homes on the island. One can go by bike or hire bikes. And there is one hostel. The holiday homes are renovated old farmhouses. So, one can say this island is for nature, hikers, cyclists, birdwatchers. I hired a small holiday house in May this year during the covid restrictions: no hostel guests.

Years ago Natuurmonumenten offered the farmers on Tiengemeten new land elsewhere to continue their business. So, no agricultural activities on the island. Only day trippers and bird-watchers. Thank you Natuurmonumenten for the successful creation of a birdwatchers paradise!

The wind turbines are not located on the island but on the mainland. But you can't miss them. They dominate the horizon. But whenever they move I know they are producing carbon-free electricity. And that is a good thing!

Next blogs: The Birds of Tiengemeten.

The Sony 90mm macro-lens reveals details invisible to the naked eye. I was lucky to discover the fly 'Bosrandroofvlieg' Neoitamus cyanurus sitting on a wooden fence. It's a predatory insect which preys on flying insects. A strategy similar to dragonflies. The animal kept returning to the same spot on the fence after short flights. Luckily, it wasn't too afraid of my camera. I could come rather close to it. It cooperated just enough to take high quality pictures. Luckily it was not sitting on a leave. The notorious disadvantage of leaves is that they nearly always move even when there is hardly any wind. That's a big annoyance for macro-photographers.

The quality of the original was good enough to show the individual lenses of the compound eye:

These are really big eyes! Most part of the head consists of eyes. By the way: a surprising effect appears when stepwise reducing the display size of the picture on a computer screen:

These patterns appear dynamically depending on the zoom factor. It's really fun to experiment with it. Because the effect is dynamical, the patterns could disappear when blogger displays them. So, I made screen-shots of two different zoom factors in the image viewer (above). To see the dynamical aspect I made this video:

You have to watch the video in full screen mode.

A requirement for the effect is that the original picture of the eye of the fly is in focus. When even slightly out of focus the effect disappears. I was fascinated by the effect and wondered whether I could reproduce it with any artificial design on my computer. So, I created this mega chessboard:

Do you see them too? By the way: a completely different effect appears when slowly scrolling up or down in the browser (especially # 1). This depends on how fast your screen is updated.

So, yes, one can reproduce the dynamical patterns of the eye of the fly with an artificial chessboard. Let me know below whether you have problems.

Sorry, I got distracted by these strange phenomena. They have nothing to do with the Sony lens or camera. Or my computer. Or my screen. Or my eyes. My guess is that the algorithm of the image viewer that shrinks an image systematically deletes a number of pixels. That is the only way to shrink a picture without distorting it. The artificial dynamical patterns are a side effect of this algorithm. Not intended. Not created for a purpose. In evolution side effects appear too. Sorry, again for the distraction. In a next blog post I will focus on the insect world as revealed by the macro lens.

Image stabilisation: ON (but the lens was also stabilised because it rested on the fence)