Further, the effect of the drug will depend on how many of the virus particles will be affected. It would be too optimistic to suppose that all replicating virus particles would be affected. I have no idea what percentage that would be. Anyhow, the unaffected virus particles will replicate at an unrestricted rate. So, it all depends on the dose of the drug. A higher dose should have a stronger effect on the percentage of affected viruses and the percentage of replaced bases in a virus genome. But a higher dose could be toxic to the patient [9]. 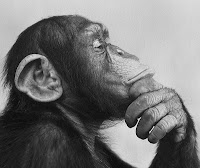 Later I found this: Ribavirin

"Studies have shown that treating RNA viruses such as poliovirus with ribavirin produce results consistent with the idea that the viruses mutated too frequently to maintain the integrity of the information in their genomes. This is termed error catastrophe.

Ribavirin is a guanosine (ribonucleic) analog used to stop viral RNA synthesis. Ribavirin is a prodrug, which when metabolized resembles purine RNA nucleotides."

This is the opening scene of the legendary Powers of Ten educational movie that was produced in 1977 and published in 2010 on youtube. Since its publication on youtube it received more than 7 million views! In the description of the video on youtube there is no mention of Kees Boeke who invented the idea of using steps of 10x as an educational device. An unfriendly omission.

However, his name is present in the last second in the Credits section of the movie: "With much gratitude to Kees Boeke". Okay, but this is rather vague. Exactly, what did he contribute? It is not clear that the film was based on his book Cosmic View (1957). Boeke deserves more than this. Hence this blog.

Kees Boeke was a Dutch teacher and education reformer. His idea was a method to teach schoolchildren relative sizes. In 1927 he made his first attempts to use steps of 10x. Much later he also tried steps in powers of two, but quickly returned to the powers of ten. He called them 'jumps of ten' because he started jumping upwards.


Boeke started with a picture of a girl [1] with a frustrated cat on her bosom. The rest of the book contains drawings, some color, some black and white. From the first picture he starts zooming out by jumps of 10x. Higher and higher above the ground. Village (Bilthoven), region, country (The Netherlands), Europe, Earth, Solar system, etc. And then back to the micro world. For a historical context: the famous Earthrise photo was taken on December 24, 1968. The book appeared 12 years before Neil Armstrong became the first human to step on the moon (1969).

The video starts with a display of the cover of Cosmic View. The universe in 40 jumps and two previous videos. That is the good news. The bad news is that only the upper half of the cover is shown. So, the name of the author Kees Boeke is not visible! What a pity! His name is also absent in the description of the video and in the Credits at the end of the video. I find the music irritating and superfluous. It would have been better to have a voice-over or at least display the steps of the power of ten in the bottom left corner.

The educational value of The powers of Ten in general is far more than teaching schoolchildren relative sizes. I think the true value lies in placing all the natural sciences on the same scale of sizes: biology, chemistry, physics, geography, earth-sciences, cosmology. Because humans are in the middle of the micro- and the macro world, it helps to see the places of all sciences on the scale of powers of ten. It would be a suitable introductory film for a Big History course because Big History is trying to integrate all sciences including social sciences.

Recently his original book in Dutch (1959) has been reprinted (see previous blog) and two former teachers of the school Kees Boeke founded, published a book about Kees Boeke and the origin of the powers-of-ten-idea. The school he founded, de 'Werkplaats Kindergemeenschap', Bilthoven, still exists. In the hall a sculpture of his head is displayed:

Email ThisBlogThis!Share to TwitterShare to FacebookShare to Pinterest
Labels: English