Sir Paul Nurse received The Nobel Prize in Physiology or Medicine 2001 for his discoveries of key regulators of the cell cycle together with Leland Hartwell and Tim Hunt. According to the Nobel committee:

"From the beginning organisms evolve from one cell, which divides and becomes new cells that in turn divide. Eventually different types of cells are formed with different roles. For an organism to function and develop normally, cell division has to occur at a suitable pace. Paul Nurse has helped to show how the cell cycle is controlled. Through studies of yeast in the mid-1970s, he was able to show that a special gene [cdc2] plays a decisive role in several of the cell cycle's phases. In 1987 he identified a corresponding human gene [CDK1]." (Nobel prize organization)

In 2020 Paul Nurse published What is Life? [1]. In the first chapters he explains biology for non-biologists: the cell, the gene, evolution, biochemistry, DNA, and control mechanisms in the cell. Almost casually Nurse tells about his discovery that led to the Nobel prize some 20 years later. These chapters constitute the foundation for the final chapter in which he develops a definition of life.  In the last chapter he defines life with 3 principles. Any entity which operates according to those three principles can be deemed to be alive.

The first principle, the ability to evolve, Nurse adopted from Nobelprizewinning geneticist Hermann Muller. According to Gánti evolvability belongs to the Potential life criteria. That means evolvability is not a necessary property of an entity to be alive. But Nurse does not make the distinction between actual (absolute) and potential life criteria. There are a few practical problems with his first principle. According to evolutionary biologist Szathmáry evolution is not a property of an individual, but of a population. Also, variability is not a property of an individual, but of a population. The principle also causes difficulties when applied to a somatic body cell of an animal or plant. All somatic body cells will eventually die when the organism dies, and they leave no descendants in the next generation. Nobody would deny that somatic cells are living. But at the same time one cannot say that somatic cells in your body have the evolvability property. Only germline cells are involved in reproduction. On the level of an animal there can be also a problem. Mules are infertile, so no reproduction and no evolvability, but they are alive. Finally one comment about evolvability. Nurse's first principle suggests that the only function of the hereditary subsystem is evolvability. Nurse does not state explicitly that the informational subsystem "is useful for the whole" (Gánti's 4th absolute life criterion) and controls metabolism.

His second principle is:'life forms are bounded, physical entities'. This equals Gánti's Chemical boundary system. What is the boundary? Unfortunately, the concept boundary is used in an ambiguous way. For cells the boundary is the cell membrane (animals) or cell wall (plants). But viruses have a capsid which is clearly distinct from the semi-permeable membrane of a cell. A capsid does not have the functions a cell membrane has. This has consequences.

His third principle is complex. It is almost a complete definition of life because two of the three Gánti subsystems are included: a Chemical information system (for example DNA) and a Chemical motor system (metabolism). Nurse also included growth and reproduction in his third principle. According to Gánti growth and reproduction are Potential life criteria. Adults don't grow, and a non-dividing cell –for example a neuron– is not dead. That's why growth and reproduction are not necessary for being alive. They are a potential characteristic of life. The properties 'co-ordinated and regulated' and 'maintain themselves' equal Gánti's third Absolute criterion: "A living system must be inherently stable".

Are viruses alive? We all agree that bacteria, plants and animals are alive. Paul Nurse says viruses are alive too [7]. I disagree. The most important reason I think why viruses are not alive is that viruses are not cells and they never become cells. Not being a cell means not having a semi-permeable membrane which enables transport of molecules in and out of the cell. Viruses are a sort of stripped-down cells. Stripped down to the bare essentials: RNA or DNA with a protein coat.

Although Nurse's principles include an abstract 'boundary', in his talk he said: "the cell is the basic structural and functional unit of life" [3]. That is Robert Hooke's cell theory. Nurse is serious about the cell theory. Rightly so. In the first chapter The Cell: Biology's Atom he writes:

"What I mean by this is that cells are the smallest entities that have the core characteristic of life. (...) The cell is the simplest thing that can be said, definitely, to be alive" [5].

Since viruses are not cells, viruses cannot be alive. Viruses are dead RNA or DNA molecules!

In response to a question from the public Nurse says "viruses are dead outside the cell and alive inside a cell" [7]. This is an unsatisfying compromise. It reflects the fact that viruses outside a cell are chemically inert; they cannot defend themselves against outside disturbances and degradation by physical forces (UV light, heat,etc). They have no metabolism. They are passive entities subjected to physical forces. But in a cell they are active and replicate according to Nurse. But this is not correct, because the cell does all the work of replicating and so on. The virus DNA or RNA does not and cannot replicate itself. But if Nurse wants to claim that a replicating virus (which is just a piece of RNA or DNA) is alive, than a chromosome or nucleus or mitochondrion must be alive too? [8]. The property 'being alive' belongs to a higher level than molecular level. It is a property at the level of the cell.

A stripped down car? 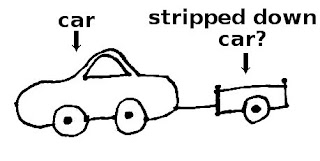 A car is a vehicle on wheels, with an engine, steering wheel, gas pedal, brakes, fuel tank, seats, etc. that moves autonomously. If we strip the car of everything except the wheels, what do we get? Is it a stripped-down car or a trailer? The trailer is connected to a car and has wheels and it moves when attached to the car. It does not move when not attached to a car. A car can move without a trailer, but a trailer cannot move without a car. Importantly, when the trailer moves, it does not suddenly become a car. Does it make sense to point to the fact that cars also depend on external factors (fuel)? So, there would be a continuum from car to trailer? No. But, cars and trailers share the property 'having wheels'. They are objects with wheels. That is the only common property.

Virus: a stripped down cell?

Similarly, do we call viruses alive just because they can be viewed as stripped down versions of a cell? [6]. No. But there is one thing both have in common: DNA or RNA. Even more importantly, they use the same genetic code (the code that translates DNA sequences in to protein sequences) as all life. They need to have the same code, because otherwise their genes would be gibberish for the cell and they won't be able to replicate and produce new virus particles. Furthermore, viruses adapt to their hosts. For example the SARS-CoV-19 is perfectly adapted to the human ACE2 receptor. A perfect match. There is no doubt viruses are evolving entities. But one has to distinguish between evolving entities and living entities:

When accepting the view that viruses are maximally stripped-down versions of cells, could we conclude from that that RNA or DNA are the bare essentials of evolution? The virus is a set of selfish genes. There you have it: the common property of cells and viruses is: replicating RNA or DNA. The classes of viruses and cells do not overlap, but are included in a higher class of objects with replicating RNA or DNA. Is this a rediscovery of the essence of Darwinism? I think so. It's all about replicating entities! Replicating entities that make errors and evolve. The 'units of life' are cellular. The 'units of evolution' are strings of DNA or RNA.

Nurse is absolutely right that the cell is the simplest unit that can be said to be alive. We now understand why the cell is the smallest life form: only a cell can integrate the three necessary components of life: a semi-permeable boundary, a hereditary information system and a metabolism. A logical consequence is that a virus cannot be said to be alive, neither inside nor outside a cell. I disagree that this is an arbitrary decision. It just follows from the cell theory.

Furthermore, Nurse is absolutely right about the profound interconnectedness of all life. And, I fully agree, viruses are intimately and necessary connected to life. They speak -so to say- the same language. But that does not make them living.

I also fully agree with Nurse that the ability to evolve is important. There would not be a single human on this planet without evolvability. But evolvability is a property of populations of DNA/RNA based units.

I thank Paul Nurse for writing such a stimulating book!

Paul Nurse: The Royal Institution 2019 lecture What is Life? (youtube)

Comments to posts older than 1 month are being moderated. Safari causes problems, please use Firefox or Chrome for adding comments.